Sandeep Yadav*, Hans Raj and Lalnunmawia
*Forest Research Centre - Bamboo and Rattan, Aizawl-796007, Mizoram, India
DOI: https://doi.org/10.22271/tpr.2019.v6.i1.008
Viewed: 1574  -  Downloaded: 431
Full Article
Abstract:Bamboo belongs to the Poaceae family and it has about 90 genera with over 1200 species distributed all over the world. It is naturally distributed in the tropical and subtropical belt between approximately 46° north and 47° south latitude, and is commonly found in Africa, Asia and Central and South America. There are few species which can grow in temperate zones also such as Arundinaria gigantean (Walter) Muhl. Among asian countries, India and China are the two major bamboo producing countries. The bamboo bearing area in India is estimated to 15.69 million hectares. There are about 125 indigenous and 11 exotic species of bamboo belonging to 23 genera reportedly found in India. About 66% of the growing stock is concentrated in the North Eastern states of the country. The principal bamboo genera occurring in India are Arundinaria, Bambusa, Chimonobambusa, Dendrocalamus, Dinochola, Gigantochloa etc. Mizoram is situated in the north eastern part of India, and it shares international borders with Bangladesh in the west and Myanmar in east and south. The geographical area of the state is 21,081 km2 which constitutes 0.64% of the total area of the country. The recorded forest cover in the state is 18,186 km2 which works out to be 86.27% of its geographical area. The extent of bamboo bearing area in the forests of the state is 3,267 km2. A number of bamboo species grow very luxuriantly in the state, most notably is the Melacanna beccifera (Roxb.) Kurz, which constitutes approximately 70% of the bamboo cover. Dendrocalamus longispathus(Kurz) Kurz, D. hamiltoniiGamble, D. strictus (Roxb.) Nees and Bambusa tulda Roxb. are the other notable bamboo species of the state having populations distributed in small patches across the state. 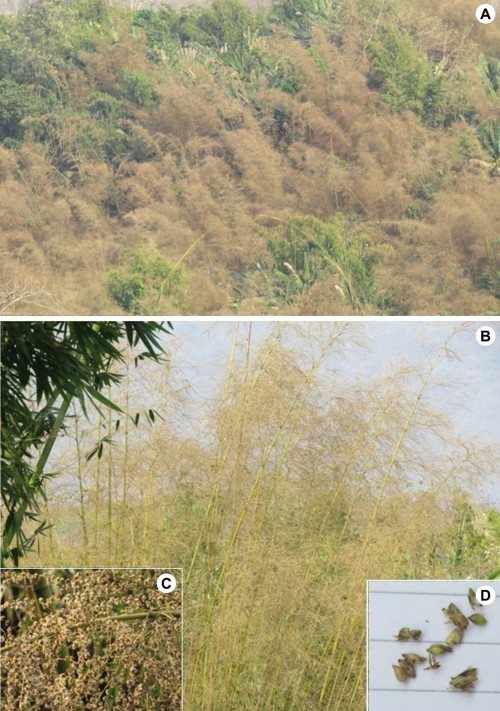