The study of Nano silica effects on the total protein content and the activities of Catalase, Peroxidase and Superoxid Dismutase of Vicia faba L.

Ghffar Roohizadeh*, Sedigheh Arbabian, Golnaz Tajadod, Ahmad Majd and Fahimeh Salimpour
Viewed: 2577  -  Downloaded: 976
Full Article
Abstract:Silica is the second common element of soil content which has positive effects on the resistance of plants against biotic and abiotic stresses. This element can increase the yield, decrease the evaporation and perspiration and moreover, causes increasing of production of antioxidant enzymes, and less sensitivity to some fungal diseases. In the present study, the effects of silica on the total protein content and activity of some antioxidant enzymes in Vicia faba L. were studied. The seeds of plant were treated by 0 (as control), 1.5 and 3 mM of Nano silica. There were three repeats for all treatments. The result showed that 1.5 mM treatment did not significantly increase the total protein content in comparison to control samples. The activity of Peroxidase in the 1.5 and 3 mM treatments of Nano silica was significantly increased. In 3 mM treatments of Nano silica also increased the activity of Superoxide Dismutase and Peroxidase significantly. Based on the results, it can be concluded that Nano silica particles can increase the activity of some antioxidant enzymes in broad bean, which in turn, brings about less damages caused by reactive oxygen species, and protects the plant’s physiological processes against stresses. 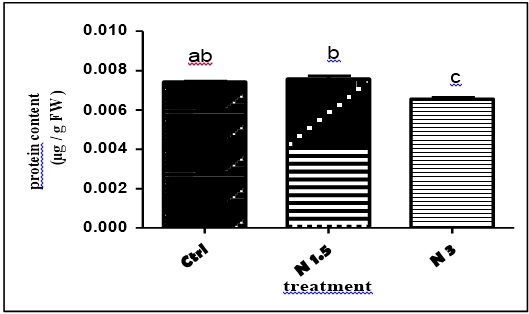