Preeti Kumari and A. K. Choudhary*
DOI: https://doi.org/10.22271/tpr.2016.v3.i3.078
Viewed: 4370  -  Downloaded: 2584
Full Article
Abstract:Exotic Species Invasion (ESI) cause a little recognized, but very substantial impact to forest ecosystems worldwide. Climatic variability, physiographic range, increasing trade, travel and tourism have accelerated the spread of unwanted non-native species to conservation areas, making vulnerable to the establishment of ESI. Exotic Invasive Plants (EIPs) are known to displace native plants, alter ecosystems processes, hydrology, primary productivity, nutrient cycling and soil structure and most importantly reduce native biodiversity. There is evidence to suggest that the threats due to ESI may increase with climate change and associated changes in habitats. In this paper, we assess the threat of EIPs to natural forests in Betla National Park (BNP), Palamu in Jharkhand State, India. Based on intensive field surveys and using quadret method we identified 142 EIPs in the BNP forest. 21 plots of 20 × 20 m for trees, 5 × 5 m for shrubs and 1 × 1 m for herbs were laid randomly adjoining the forest at 10 to 100 m distance from the road and settlement area. Total 14 EIPs were recorded among which Lantana camara and Parthenium hysterophorus were found to be the most dominant species. . The survey revealed that apart from the ecological harm, invasive plants adversely affect the livelihood of all those who are dependent on forests. The paper identifies impact, early detection and rapid control, prevention of spread and habitat restoration as urgent measures for combating the threats. 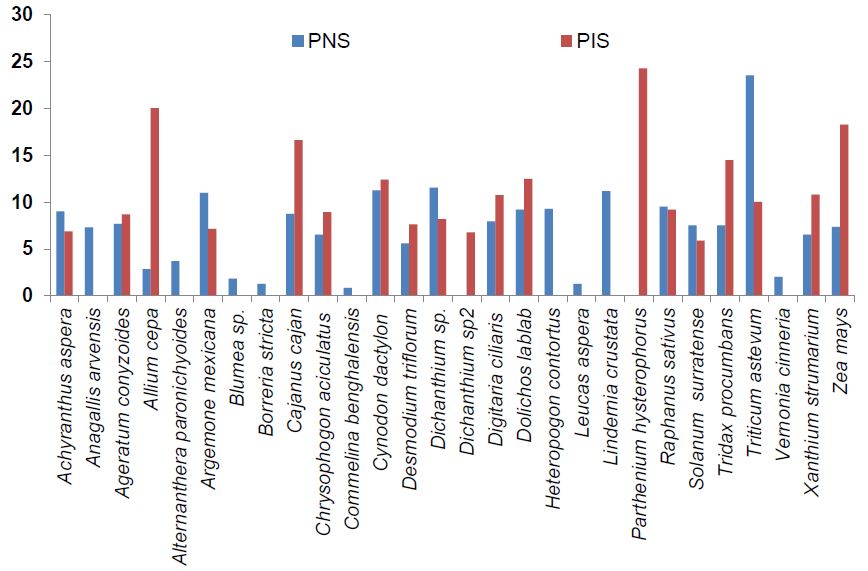