Mandeep Kaur and Avinash Kaur Nagpal*
*Department of Botanical and Environmental Sciences, Guru Nanak Dev University, Amritsar-143005, Punjab, India
DOI: https://doi.org/10.22271/tpr.2017.v4.i2.032
Viewed: 3347  -  Downloaded: 1259
Full Article
Abstract:Vehicular traffic adds up different kinds of contaminants like heavy metals, polyaromatic hydrocarbons, gaseous toxins etc. to the atmosphere. Pollen grains of different plants have been found to be sensitive to these pollutants, which show varied effects on their viability, and size and hence can be used as bioindicators of air pollution. Keeping this in mind, the present work was designed to measure the pollen viability and pollen size of three common roadside plants, namely Alstonia scholaris, Nerium oleander and Tabernaemontana divaricatabelonging to Apocynaceae family growing at seven sites of Amritsar city with varying levels of traffic stress. Pollen viability and pollen size were studied using 2, 3, 5-triphenyl tetrazolium chloride (TTC) staining method. The percentage of pollen viability of A. scholaris ranged from 32.45% to 65.74%, for N. oleander it ranged from 30.3% to 45.11% and for T. divaricata it ranged from 14.31% to 49.62%. Pollen size ranged from 22.86 to 23.94 µm for A. scholaris, 29.58 to 32.17 µm for N. oleander and 29.83-32.43 µm for T. divaricata. Pollen viability was found to be inversely proportional to a load of traffic at a given site whereas no remarkable variation was found in pollen size. For A. scholaris, a significant negative correlation (r= -0.762, p≤0.05) was observed between pollen viability and traffic load, while for other two species correlation between pollen viability and traffic load was not statistically significant at p≤0.05. 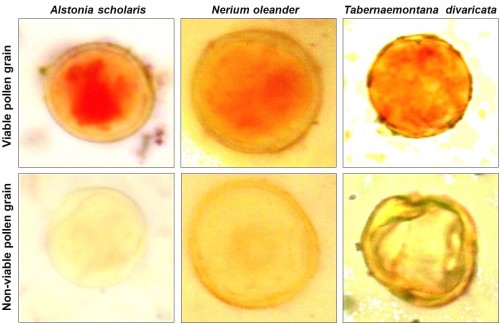