Wendy A. Mustaqim*, Dimas H. Pradana, Reza Saputra and Margi Hartanto
Organisasi Mahasiswa Pecinta Tumbuhan (OMPT) Canopy, Department of Biology, Faculty of Mathematics and Natural Sciences, Universitas Indonesia, Depok, West Java
DOI: https://doi.org/10.22271/tpr.2017.v4.i2.044
Viewed: 2470  -  Downloaded: 659
Full Article
Abstract:Didymoplexis is a genus of mycoheterotrophic orchids which consists of about 20 species. The genus is widely distributed in the Old World tropics. Didymoplexis micradenia is one of the species which occur in Java. The first record of this species in Java was made by Smith (1900) under the new species discovery, namely Didymoplexis minor. He mentioned the Buitenzorg (now Bogor) as the locality. This information also has been used by him in his further treatment of the orchids of Java, Die Orchideen von Java. A year before the time Comber (1990) published the latest comprehensive account of the orchids in Java, Didymoplexis minor has been listed as a synonym of Didimoplexis micradenia by Lewis & Cribb (1989). The latest state has been used by many recent studies. The first discovery of Didymoplexis micradenia in Universitas Indonesia has been made around the year of 2012 to 2013. But, no good specimens were available, especially the flowers. Around the middle of October 2016, around 50 individual have been found and adequate materials have been collected in the form of spirit materials. The recently collected specimens were deposited in the herbarium of Bogor Botanical Garden (KRB). 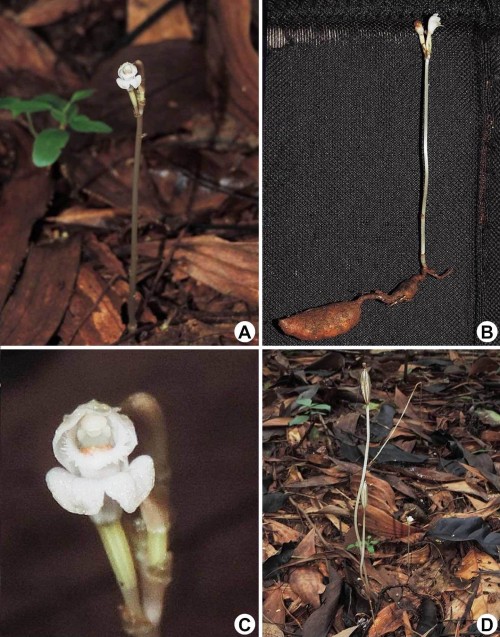